…aka selling the dream 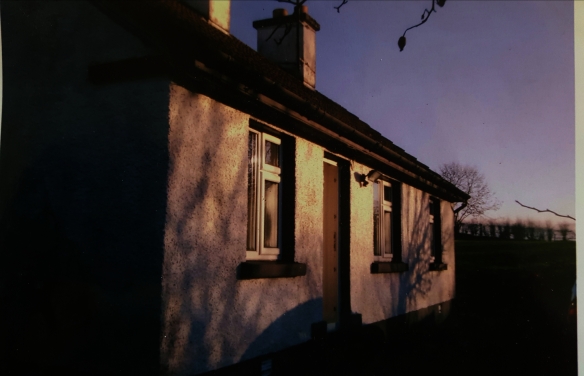 It was the late summer of 2004, when at 29 years of age, with some self pressure to fulfil the plan of owning my own house by age 30, that I found it. I had taken a day off work to go and see some different houses on the Dublin commuter belt which meant I’d widened my search into Meath. Finances and buying it solo meant that any hope I had of home ownership in or near my job or parents in Dublin was not an option. That week a pile of brochures had arrived in the door and I had a general idea of where I was going to go. As I was about to leave that morning, the post arrived, and sure enough it was another brochure – estate agents at the time of the boom fell over themselves to show you their portfolio if you displayed even an inkling of interest. As I glanced mindlessly over the pictures that all started to look the same, a loose page fell to the floor. And there is was – a cottage on an acre that had just come on their books. It was a bit further away than I’d wanted, but I quickly overlooked that. The picture had been taken on a dull day, I could tell, but the bright white of the cottage against the backdrop of dark green grass called to me. As a complete person of impulse, I decided before I even saw it that it was going to be mine.

I remember following the estate agent in my car, up a country road just outside the town of Oldcastle. The house was in Newcastle. I liked the way it sounded. We pulled up outside a little rusty whitewashed gate, surrounded by high hedges and trees. I love trees. Driving in through the gates, I was immediately captivated by what I saw. It was green. So much green. It had trees, lilac, hawthorn, elder, crab apple to name a few, and there was an amazing lush field that stretched out the side from the cottage with more trees along the far border. This place had obviously been much loved since its birth in the 1950’s, as there were three different secret gardens with an assortment of trees and hedges and flowers, which I later came to know were planted with such an appreciation of flowers, that there was never a season of the year where there wasn’t something beautiful in bloom. I imagined taking my morning coffee at a little marble table nestled in this special place before I’d even gotten out of my car.  At that moment I didn’t care what the house was like. I couldn’t believe that this huge piece of land could be mine. I’d own land. I’d be a landowner. I would be someone. I made an offer that day.

Everything became a bit blurry after that. Things seemed to happen in space above me. Various parties exchanging money that had never even touched my hands. But it was happening, and one afternoon in the early autumn of the same year, I collected my keys. I remember driving up and entering the newly emptied cottage. It was cold inside. No electricity – well it had, but I didn’t know anything at the time about trip switches and the like!! I remember that I lit a cederwood candle on the kitchen counter, and poured tea from a flask I had brought with me, and standing there, trying to let it sink in that this was my house. Mine. And I thought about something my grandmother once said – “Once you have the keys to your own house it doesn’t matter if you only have one chair to sit on when you close the front door”.

I walked the lenght and breadth of the acre I now owned over the next few months, and I wandered around the outbuildings, consisting of a concrete shed, a barna shed and a little shed housing the central heating. Everyday after that as I arrived ‘home’ from my sometimes 2 hour drive from work and closed the gate behind me,  I felt like I had stepped out of the real world, which at the time was stressful and hectic, to a little sliver of heaven.

Over the next couple of months I discovered what it really felt like to be a homeowner! Bills. And lots of them. Insurance, oil, coal, paint, bins, more paint (because I accidently painted my whole bathroom in gloss…say nothing). I lived on pasta pesto with feta cheese, big glasses of red wine and videos of A Touch of Frost for the longest time (cooking wasn’t really my thing back then…).

I had to get used to the dark again. It was pitch black at night. Pitch. Black. I was used to the outside lighting from the prison that was next to my parents house, filling my bedroom with a constant hazey glow when we turned out the lights at bedtime. So I slept with little tealights burning on the fire hearth for some time.

I also had mice. I’d never had mice so that meant I then had hysteria. And hysterical phonecalls to my mother. But then after the guts of a bottle of vodka with a friend one night, we caught those little furry things, and I met my first neighbours since moving in, because there was no way on earth that I was releasing them back into the wild by myself, and my (useless) friend was worse than I was, so Cathal did it. My neighbours husband that I introduced myself to at about 11pm that night by banging his door down and telling him my prediciment. He brought his flashlight out the road with this fairly drunk excitable new neighbour of his and solved all the mouse related problems of my life that night. Cathal and his wife Nova are the nicest people on this planet, and I’ve been blessed that our friendship has stood the test of time and distance. They are super neighbours.

Then there were parties. Quite a lot of them. There were painting parties and pulling walls down parties, there was of course the mouse removal party, some lovely intimate parties, and of course wild dancing and singing parties, where the cd player never stopped spinning, with almost all of them ending with me dancing in my field, singing ‘The Age of Aquarius’ whilst holding a citronella candle (I wasn’t used to bugs back then either…). Im sure it was at one of these parties that my best friend Micheal Ryan deemed my house the slanty shanty, and took my favourite picture (above) of my house.

I had great plans for this place. Wild wonderful plans. Think the contents of John Seymours book ‘The NEW Complete Book of Self Sufficienty’ combined with the work the earth goddess Colette O’Neill has done over at Bealtaine Cottage and you get my drift. But the universe had other plans.

That Christmas, I met my husband to be on the Aran Islands.

I’m now fulfilling those wild plans on Inis Oirr, this amazing beautiful island that truly holds my heart. The same plans I had all those years ago whilst sipping tea in the evening sun at the cottage, whilst watching foxes and hedgehogs visiting my garden at dusk, and alas my cottage is up for sale.

Its been for sale for two years now, and I’ve often wondered why nobody has snatched it up in this time. But deep down I know why. Its because its story hadn’t been told. Every home, every house has a story to be told, and this is me telling the story of my slanty shanty. Telling the houses’ own story. Letting it go. My dear friend Louise said to me one evening, you know as soon as you release it it will go. Of course she was right. So I release you. I’ve moved on. It’s your turn now.

These days the hedges are tall and overgorwn, you can hardly see the gate. The flowers are buried deep under weeds, birds have planted elder trees that have now grown rapidly over the last couple of years in places where there were none. And my field is now wild and overgrown, where once hay bales used to sit and horses use to graze. But even now, when I visit, I can still sense its heartbeat.

So dear universe, here I stand and I hope that whoever the new owner may be, or whatever plans they may have, that they find the love that I left there for them, and dance at least once naked under the stars in my field of dreams.