Up until the very first time TQM ever took me ‘out to the cows’ back in 2005, I had never really had any experience of them. I’d often see them from car/bus/train windows, as I hurtled my way out of the city at any opportunity, and there they would be – standing or sitting, eating or sleeping and more often than not, having..ahem…relations. I always liked cows, I just never knew any!

That all changed when I met Blondie. TQM had two cows. And instantly Blondie ‘became’ my baby. She was a beautiful cow, a honey blonde colour – hence her rather uninspired name. I couldn’t wait to get over to the island on a Saturday morning, just in time to feed and water her. She always came over when she heard the van – I used to say ‘oooh look she knows it’s me ‘ to which I received the retort – ‘she knows it’s food’! Whatever! And she loved getting rubbed on her nose and scratched behind her ears. She also drank straight from the hose. I maintained she was very intelligent. And back in work, I had pictures of her hung on my noticeboard much to the amusement of my office. To them, I was morphing into Peig Sayers. Then one day, while TQM and I were away for a couple of days, he received a phonecall and was told that Blondie had slipped down some rocks in one of the fields and hurt her leg. I didn’t know what that meant. I was told that she had some tendon and nerve damage and if she wasn’t able to get up, she wouldn’t make it. I remember arriving in the dark on that Friday evening, going straight from the pier to the field and calling her. She answered me and tried to get up, but she fell back down. It was devastating to watch. I remember driving to a fancy equestrian shop in Loughrea and spending €200 on a special horse blanket, so that she wouldn’t get cold whilst she couldn’t move. I remember rubbing her face and scratching behind her ears before I had to leave her to head back to Dublin. And I vividly remember the call telling me that she had died.

Vowing to myself never to get so attached again to a cow, I tried to learn and understand a little about how they are farmed over here. And I also had to learn to accept the process and outcomes of owning cattle. (In my world, I’d have retirement fields for old farming animals that have passed their use by date ).  So on the island, none of the cows are currently used for dairy, although there is nothing stopping you milking a new mammy cow to get some for your breakfast.  Most of them are used for breeding, with their calves, once old enough, sold on either to farms in Galway or the like, or to other islanders -( I have to admit I like it when our calves stay on the island, even if it’s not with us).  We ourselves  have always kept two cows, and for the longest time now we’ve had Roisin Dubh and Bertha, who both calf every year, and we’ve a new heifer which we’ve called Domino. We then sell on their calves when the time comes around. And all of our calves also had names. We’ve had Blackie, Dora, Mike, Izzy, Easter, Brambles, Alfie, Michael Ryan, and George to name a few. 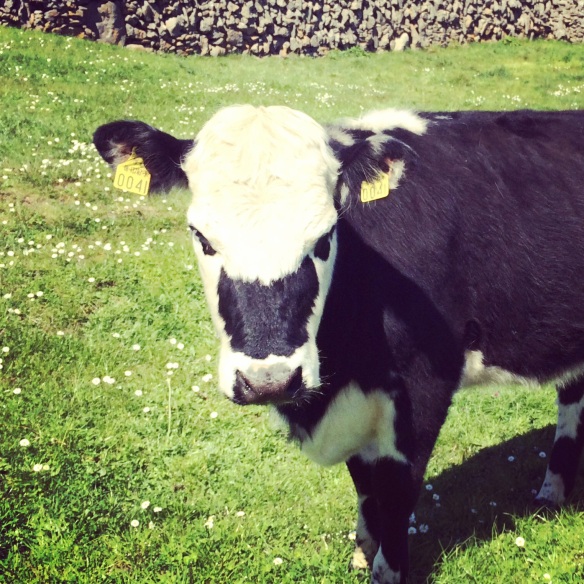 And as much as I tried not to become attached, it’s very much a case of easier said than done.

We’ve had Bertha since the year we got married, which was back in 2007. Toby, her calf was three weeks overdue. Bertha is huge at the best of times (hence her name – ‘berth’a) so you can just imagine the size she was. TQM got up 3 times a night to go and check on her in the month leading up to it. He does this every year at calving time. I knew it was only a matter of time before we had a ‘new baby’ when he called me in to do her checkups whilst he was working. Donning the muck boots I visited with my cow and rubbed her nose and scratched behind her ears. I wasn’t there when she calved the following morning, but my husband, the vet and some of our neighbours were there to help out. And she needed help. Her calf was huge. As soon as she had him she collapsed in the field. The calf was named Toby. And he was beautiful. He had to be fed with a bottle as Bertha wasn’t standing, but he did make it over to her and she smelled him and cleaned him. But something had gone wrong, and Toby died two nights later. We were devastated, still are. But our attentions are remaining focused on Bertha, and almost daily, without fail, a group of our wonderful neighbours go out to the field and help to lift Bertha with a hoist in order to get her circulation going. She’s chewing the cud, seems content. She wants to get up, I can tell. And she’s moving around a bit using her front knees, dragging her back legs. But she’s still not up. And as the horse blanket was once again dusted off in order to keep her warm and dry, a dread has hung itself over me. I’m hoping any morning now to find her standing at the gate with her big horns in the way of everything. But we have to be prepared for whatever the outcome may be. Such is a cows life. Such is island life. Such is life. 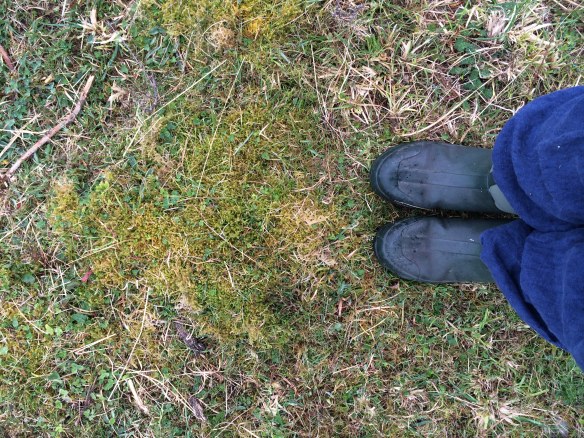 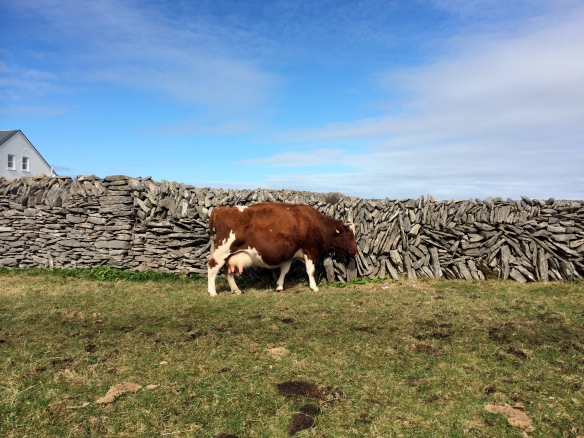 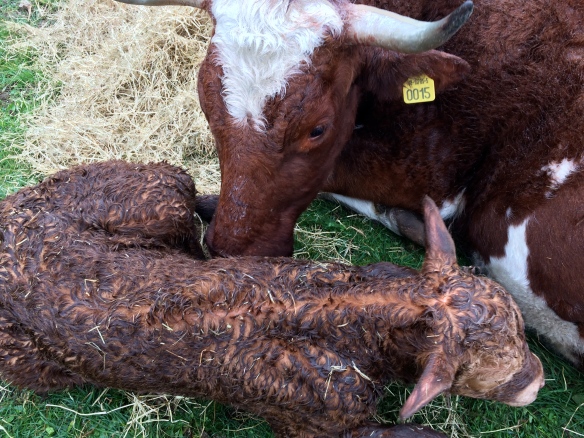 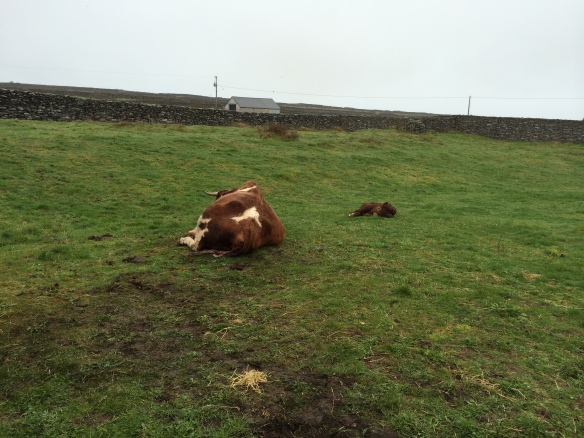 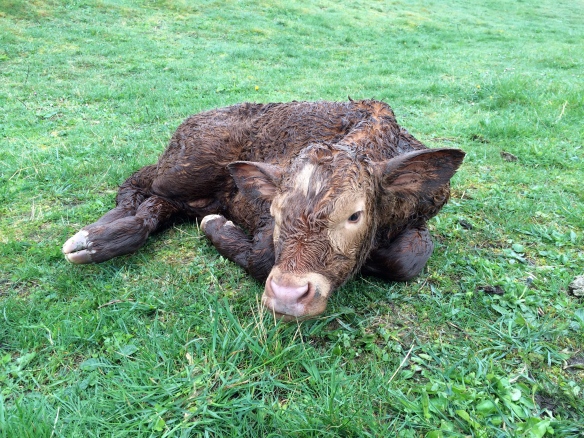 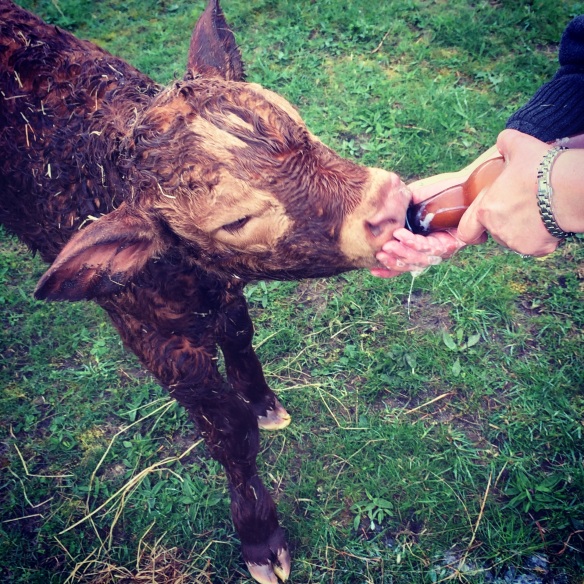 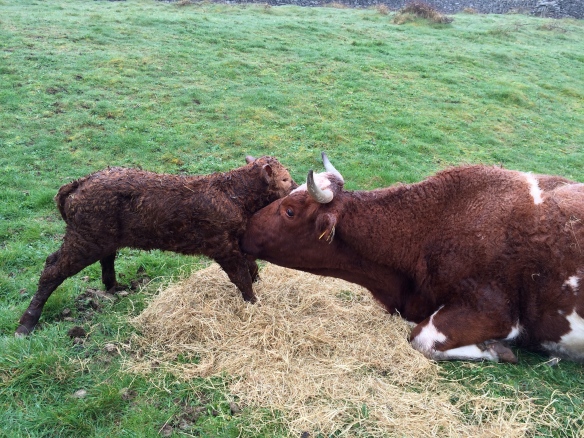 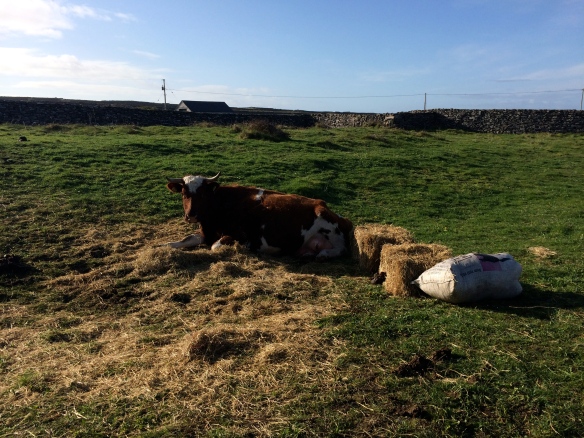