Last week I went into Galway. I had an appointment, which in the end only took twenty minutes, so it left me with a bit of time on my hands to wander. What’s rare is wonderful as they say. I got a few little random things done, and with only one other place left that I ‘needed’ to go to, I stopped to have a lovely leisurely brunch with a friend at Providence Market Kitchen.

Afterwards I headed off to run my last errand. It made a nice change to walk, as usually I would be time restricted so would zoom about in the car in the belief that I’d get more done having wheels under me. And I pondered, as I came across little cafes and restaurants, and book shops, art galleries and vintage shops that I’d often heard of or read about, but would never have had an idea where they were located, that a lot is often missed when zooming in a car! I walked down a few little backstreets, old streets that were a welcome break from the bustle of Shop Street. And I arrived at the place I needed to go.

I’d wager that you would pass by this building if you weren’t intentionally looking for it. It’s name in big white letters painted on black tells you clearly what it is. But it’s unremarkable. The sign looks old fashioned in a bygone era way, and the shop front would make you think that no trade has passed through its doors in years. But you would be mistaken.

I went in. And stepped back in time sixty years. Vastness, combined with rows of wooden shelves covered in old wallpaper, boxes piled high, trolleys down the back, the little account office up in the front corner. It was the air. I pondered as I breathed it in deep. It was old air. Not musty air or air filled with damp. It was the smell of ‘old’ air, as if the air that entered when the business opened sixty years ago, was captured in that moment of time, and has been circulating ever since. It was comforting. The man was there.

We started up a conversation, the man and I. He was on his own that day, as his accounts lady was at a wedding, although she had popped in earlier that morning to do a few little bits, he told me. “She looked absolutely beautiful I have to say” he said of his only staff member, as if he’d only noticed for the first time. “We’ve been in business sixty years” he said proudly. He looks tired. I praised him for managing to stay afloat in light of the last number of hard and difficult years. “We had lots of staff when we first opened” he said pulling a plastic covered black and white photograph from a noticeboard. The browning of the sellotape on its corners would suggest that this picture has been taken down and shown around on many occasions. The back of the picture said ‘staff party 1954‘. He hands me a second picture, this one dated 2003. There are noticibly less people in this one. “There’s just myself and one other person now, the accounts lady, but she’s off at a wedding” he tells me, as if for the first time. I acknowledge him again, as if for the first time. I commented on how wonderful his premises were and how it felt like a gateway to the past just walking in. He told me he’s had a lot of interest from people, looking to lease/buy/make movies in the place. But he’s not on the market. “I nearly sold up once” he stated, “I was offered a lot of money for the place, I mean a lot of money. It was before the bust. We were very close to selling it. And in the end, my brother who has a part share backed out and that was that. We were lucky. Because if we had sold it, I was going to put all the money in Bank of Ireland shares for my children. And we all know what happened then. I would have lost everything. This place, and the money for my family. I’d have had nothing.” I shook my head. “I still have nothing” he quickly added,”I’ve no money. But I’ve no debt”.Is that all that people can ever hope for in these times. To be penniless, but to carry no debt? I pondered about the greed of the government and of the people in positions of power in the banking industry, and of the greed of estate agents, builders and even the normal working person on the street that brought about this current life we are all enduring. And I wondered have we learned enough from our mistakes and the mishandling of finances to ensure that we never end up like this again, in our own personal life, in our financial sector, in our governance?! I’m not yet convinced as I reflected on recent news stories about property bubbles and gazumping!

He nods up at a picture of the Sacred Heart, hung high up on the wall and said “He’s looked after me all my life”. “Me and my wife, but she’s dying now”. He says it so simply that I wasn’t able to digest his words. “She was diagnosed with cancer March last year, and was only given three months. But she’s still with me”. “I’m so very sorry to hear that” I replied, “What is her name?”.”Geraldine. We’ve been married fifty seven years, and there’s not one day that she hasn’t said she loves me. I love her to pieces.” He shows me two other pictures, this time of him and his wife, and one of both of them with their grandchildren. His eyes welled red. As did mine. “I’m closing up once you leave, I’m heading to see her, she went into the hospice the other day.” I told him I wouldn’t hold him up any longer. Putting my arm around his shoulder, I offered to give him some sort of comfort, and as I was leaving I turned to say ” I’ll light a candle for you and for your lovely wife, and I’ll be thinking of you”. As I walked over the road, I heard the bolts go on the old doors.

Heading back towards the heat and the bustle, I thought about the power we place in the words ‘I’ll light a candle”. And I pondered it. And what I came up with it that ultimately it has nothing to do with any religion.  It has however everything to do with hope. When I say those words, I want the person to know that I am placing their intentions in the light of a candle, in the light of hope. That when I’m lighting a candle I’m thinking of them, and their worries, and their troubles. Hope is what will get us all through these hard times, and we can only benefit from more light, don’t you think?. And when I lit the candle, I pondered no more. 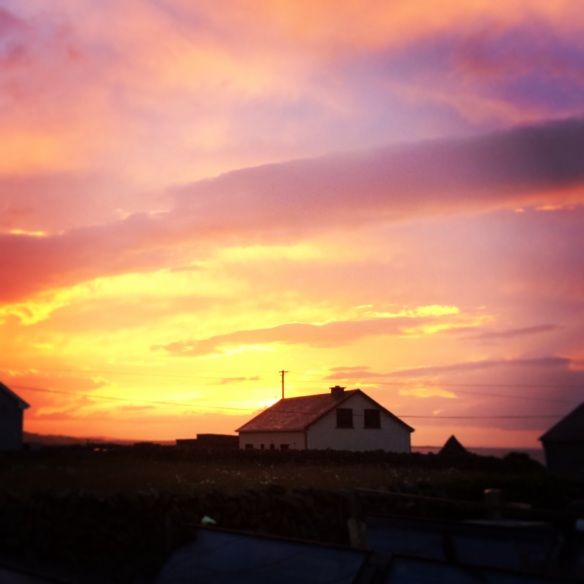