It was April a year ago when the dolphin arrived in the pier of Inis Oirr. Now I’m sure she’d probably been there before, Doolin isn’t that far away, but it was the first time I’d seen her. As the boat rounded the corner, TQM shouted up to me from the front of the boat as he was throwing the ropes to the lads , “did you see the dolphin?” It was more for the benefit of the kids, but I was just as giddy. We watched over the edge, waiting, and then up she came with a big blow of sea spray and with one fluid movement her curvy body went back under. It was thrilling. I immediately loved her. The kids were jumping and squealing at the sight of her. And she seemed to revel in it, coming up more frequently to her audience. We stayed there a little while longer and the talk was all about her when the kids went to bed that night. That evening I walked back down alone – there was nobody else about, and I stood at the rails just watching and waiting to see if i could catch a glimpse again. And sure enough after a few minutes, there she was. I wondered how long she would stay. It was a perfect scene.

The talk amongst the islanders was that this was Dusty, a notoriously aggressive dolphin from Doolin. Then there were some people who remembered a dolphin from a few years ago that used to frequent the island, and that dolphin had been named Sandy. So some thought that maybe it was her. So with all the talk about whether it could be Dusty or in fact Sandy, one day at the slip on the beach, my little girl saw her and shouted ‘mammy – its Sandine’ – and since then that’s who she has been to us.

She had stayed around a few weeks at this stage, and it became a habit of mine to walk around the block by the pier most nights just to see her slowly rise and fall into the sea. Something about the size of her, or her presence or her energy, for want of a better word, made me feel safe. She was stunning. The talk was all about the dolphin, but it seemed there was something more worrying in the distance. Unfortunately Sandine came with baggage, and not all of it good.

It turned out that Sandine was and is in fact Dusty. As I enquired about the ‘horror’ stories from Doolin where she had seemingly caused some serious damage to swimmers in the area by hurtling at them at breakneck speeds and hitting them with her beak, the stories that had people talking to Joe,  I was also told the other stories of people trying to grab her and ride her and most disgustingly pouring alcohol down her blowhole. These were stories that didn’t seem to hit the headlines. Local people obviously and rightly had their concerns. But I really think everyone thought that she’d head back off to Doolin eventually. But it didn’t happen. She liked it here. And so she decided to stay.

Living so close to the pier, I’d pass by it, and the beach daily. I used to love the early morning beach visits I’d have with my little lady after picking up a coffee in the shop. And we’d watch her come right in to the slip as the tractors lowered the fishing boat trailers into the water for a days work. She loved this part of the day, you could tell, as no matter where she was, as soon as she heard the distinct clattering of metal on concrete she’d be over in a flash. She was big and strong and wicked fast and an absolute sight to behold.  I spoke to some of our local fishermen, asking about whether the dolphin was eating their fish – worried too in case it would be another reason for people not wanting her around. They said that she’d be out beside them the whole day but wouldn’t eat a single thing they’d throw to her. I laughed that she was getting her sushi elsewhere, and I sighed a little relief that she wasn’t depleting the islands fish quota! And I’d often return in the evening to watch her again, this time neglecting whatever she was doing to entertain herself and coming to escort the fishing boats or little currachs back into the slip – it was like she was finishing up her job for the night, just like the fishermen!

Even though the tourist season hadn’t kicked off fully, I was beginning to notice the presence of a number of people around the area. People who would spend endless hours in deep waters swimming with Sandine, some that would just stand there like herons waiting to take pictures, and one in particular who went into the water with homemade devices strapped onto himself in order to swim and appear more dolphinlike I imagine! These were Sandine’s fans, and some would say friends, and they brought spectators. Then the tourists started arriving. They would get off the boats and line up along the pier. They wanted to see the dolphin, to touch her and they wanted to swim with her. More and more crowds gathered around the steps of the pier, where there was a permanent show of dolphin interaction. Television crews, deep sea diving photography, interviews – it was all go on and around where she was. It was a circus. I didn’t go near the beach last summer and only went to the pier if I really had to. I had a fear. I had a fear that people would push things to far, as often they do in extreme situations, and that something bad was going to happen. I didn’t want to be on duty the whole time while I was supposed to be enjoying sunny days with my babies, telling people of the dolphins warning signs, or the safest depth to go in as far as, or not to try and grab her, or telling drunk stags not to be jumping off the pier. I had stories filter back to me of someone having to go to hospital or getting bumped in the leg or back. I dreaded to hear that. I just wished she was left alone. I heard the other stories too, of people deliberately trying to grab her fin or not heeding her splashing tail or her open beak and ending up getting shunted out of the water. People were complaining that they couldn’t swim, that the dolphin was becoming a nuisance. People believed it was their right to swim in that water, overlooking the fact that the dolphin lives there. I understood both sides of the argument. Last year was drama. Then the visitors left.

I’ve learned a lot about dolphins over the past winter, and in particular Sandine. I’ve learned her warning signs. I can tell if she is stressed, spending long periods of time scouring the sea floor especially if there are other pods of dolphins around or basking sharks in the area. Did you know that other pods are not particularly open to solitary dolphins? That’s why she is alone. Sometimes another solitary dolphin comes along and for a couple of days there is some fantastic displays of synchronised swimming and breeching, and I often hope that she find’s a true love and swims off into the sunset, but it never happens, I just find her a day or two later, back swimming alone out around the buoys. I’ve learned she likes playing games. I’ve learned she brings you gifts of seaweed and bottles and dead things. I’ve seen her hurl herself out of the water in an explosion of seaweed on stormy days – you know, just having the craic with herself.  I’ve learned that she blows bubbles when she is happy. And farts from her blowhole too  – indeed! But I’ve also learned in the past year that ultimately she is in trouble. And I know the reason why.

The plight of Sandine is due to people. Now I’m not talking about the jerks that torment her,(that’s a different story) or even the people that are genuinely too scared to go swimming off the beach in case they encounter her – not at all – she’s massive – I certainly wouldn’t go in as far. And I’m not talking about innocent bystanders that have been injured by her for what seems no apparent reason. I’m in fact talking about the people that have befriended her. The people that are her biggest allies and supporters. The ones that have been with her for many many years. In their attempt to try and help her ‘remain’ a dolphin, they have in fact almost domesticated her to a point where she see’s them as her ‘pod’ so tends to be overly aggressive whilst they’re swimming in the water with her. She is expecting the company of humans. But only ‘some’ humans! She is expecting to be entertained and played with. She’s almost narcissistic in her behaviour, which is mirrored in some of the people that hang around with her. It’s ironically by the actions of well intentioned people, who found her and made such soulful connections with her, that we are in a situation that she is now a considerable cause for concern. This concern has now been catapulted into the media due to a recent article written by a well know columnist after he’d been frightened by the dolphins behaviour whilst over here on a break. It was all over my own social media pages, and it was on the radio and had even made the main news on RTE. I hate this kind of publicity. Even though its correct in its content it lacks the benefit of the full story.

So where do we go from here? We have a dolphin, a beautiful, intelligent animal, but a creature who is as unpredicatable as she is wild to the core, who if had been left to her own devices may have in fact gone off to live happily in the deep ocean, who knows?, but has now become dependant on her ‘human dolphins’ for companionship, but she is not human so does not understand the social rules that some people seem to expect of her such as tolerance, self control and keeping her distance. We need to stop blaming her too. The sea is her home, whether people like it or not. This island is such a haven for the people that live here and for the visitors that come every year, and maybe that’s exactly what it is for her too. But it needs to be a safe haven for everyone, and at the minute it’s not. And I think we all know where the solution needs to begin! 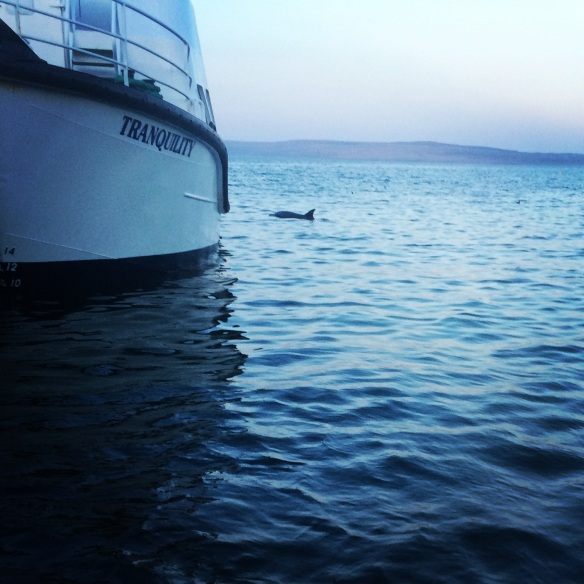 2 thoughts on “the plight of Sandine…”

Leave a Reply to Sadhbh @ Where Wishes Come From Cancel reply